September 7--  Today GreenLaw and Stack and Associates, on behalf of Ogeechee Riverkeeper, filed an appeal of the Georgia Environmental Protection Division’s issuance of a water pollution permit for King America Finishing.

"For over 6 years, King America Finishing has illegally polluted the Ogeechee river.  Tens of thousands of fish have died as a result of their illegal activity and the river downstream from them has been unsafe," said Dianna Wedincamp, 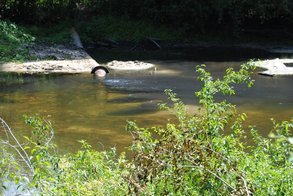 Ogeechee Riverkeeper.  "The permit that the state issued allows this pollution to continue.  We believe the state should require King America to remove the pipe from the Ogeechee and re-use their wastewater instead of subjecting people and wildlife to their toxic chemicals."

“The state has consistently and repeatedly refused to require King America to stop its pollution of the river,” said Hutton Brown, attorney at GreenLaw.  “This permit violates state and federal law.  It gives the industry the ability to add more pollution to the river and to continue to degrade the health of the river and put fish, wildlife and people at risk.”

The permit issued to King America Finishing should have much more stringent limits for ammonia and other chemicals that lower oxygen levels in the river.  Toxic chemicals, such as formaldehyde should not be allowed to be discharged into the river.  Many other known pollutants in the industry’s waste stream are not required to be monitored or limited by the water pollution permit.

“The permit continues the pattern of coddling the industry at the expense of those who are most affected by the pollution,” said Don Stack, Stack and Associates.  “The pollution permit issued to King America Finishing excuses the industry from the responsibility to clean up their waste before sending it out into the Ogeechee. By filing this appeal on behalf of Ogeechee Riverkeeper, we are asking the Office of State Administrative Hearings to find the permit invalid and send it back to the state agency.”

To view the comments, visit www.greenlaw.org/ogeecheefishkill